Let your players challenge each other and battle it out one on one. Keep score on won battles! Show of results on a big screen TV. This is a great opportunity to let your players engage on a more personal level. Get the adrenaline going, let the battle begin!

Feature unlocks:
– Players can challenge other players to battle
– Two themes to select from
– Challenge on the highest score or first to target

A new score series will be added to keep track of results, it’s called Battle Results.

As a bonus:
– You can set up most won battles as badge or competition! To trigger to players to battle even more! 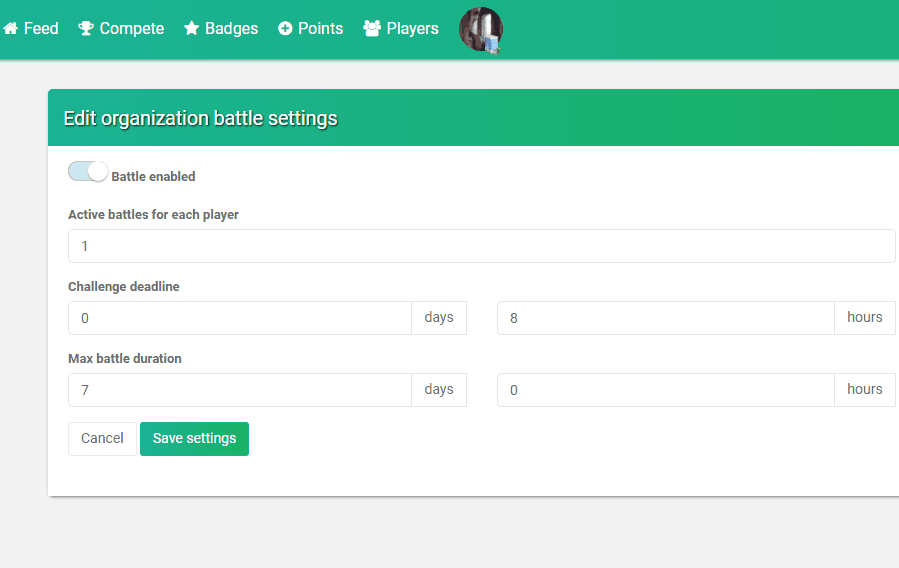 Battle settings are found under:

Battle settings are found under settings menu. The gear wheel Icon on the left navigation panel.

This website uses cookies to improve your experience while you navigate through the website. Out of these cookies, the cookies that are categorized as necessary are stored on your browser as they are as essential for the working of basic functionalities of the website. We also use third-party cookies that help us analyze and understand how you use this website. These cookies will be stored in your browser only with your consent. You also have the option to opt-out of these cookies. But opting out of some of these cookies may have an effect on your browsing experience.
Necessary Always Enabled
Necessary cookies are absolutely essential for the website to function properly. This category only includes cookies that ensures basic functionalities and security features of the website. These cookies do not store any personal information.
Non-necessary
Any cookies that may not be particularly necessary for the website to function and is used specifically to collect user personal data via analytics, ads, other embedded contents are termed as non-necessary cookies. It is mandatory to procure user consent prior to running these cookies on your website.
SAVE & ACCEPT

Let's have a chat

We Would Be Happy To Assist you, Write to us!